After quite a struggle, I managed to compile the Walt Disney Animation Studios BRDF Explorer (released during SIGGRAPH) myself. Only to find out that a binary has been available for 2 days. 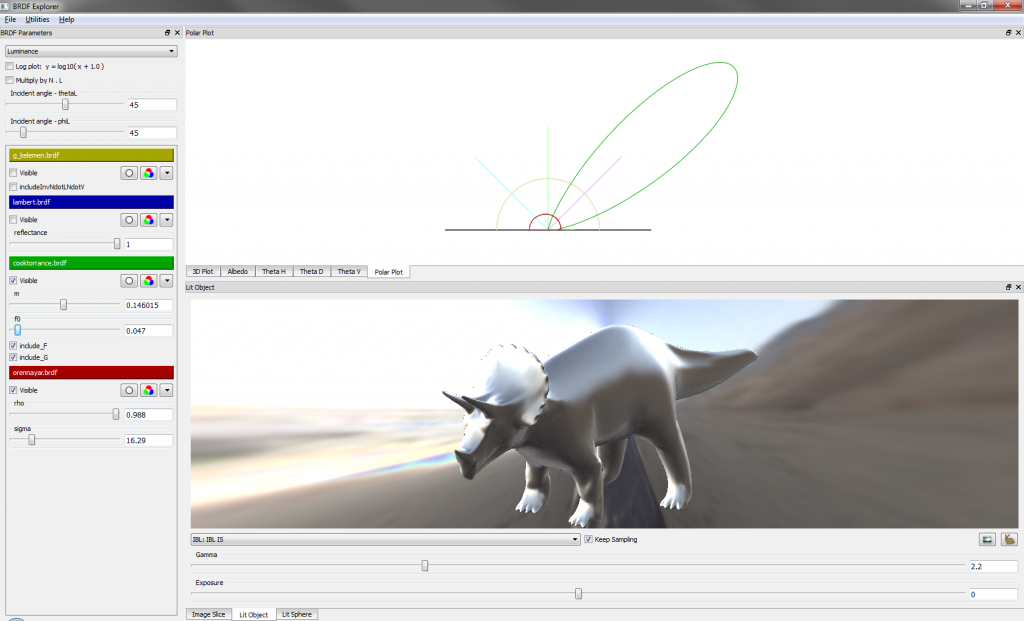 I’ll post some quick info on it anyway, for those interested in compiling (future versions) themselves. Thanks go to Mark Lee, Stephen Hill and Yuriy O’Donnell, kind CG twitterfolk who have tweeted hints and tips during their compile journey.

A GLEW <-> QtOpenGL conflict held me from compiling it on Linux, although people have been reporting that it can be fixed by including either <QtOpenGL> or glew.h (but not both) in the source files can remedy things. It’s a known bug in the latest QT version.

The following Github repository contains the wdas-brdf code and a bunch of fixes for Windows32 compiling with VS2010: https://github.com/kayru/brdf – I suggest downloading the code from there.
As per instructions, navigate to the source folder, and run:

to generate the Visual Studio Solution file. Open it, then edit the project properties so the compiler can find all headers to include and all libraries to link. The QT Libraries should be found fine by qmake, but you probably want to double check the GLEW/GLUT/zlib paths. I also had to change the referred GLEW library from GLEW.lib to glew32.lib, the one I compiled myself. The library was also listed twice.
My final dependency line reads like this:

If the application compiles, but crashes on QTVector/other QT-related errors, it’s because your system cannot find the right QT libraries. You can remedy this by copying over QtCore4.dll, QtGui4.dll and QtGuid4.dll from C:/QtSDK/Desktop/Qt/4.8.1/msvc2010/bin to your executable directory.

One Response to "Compiling the WDAS BRDF Explorer"