Following several Twitter and blog mentions, rumor had it that Oculus VR was having a booth at SIGGRAPH 2013, where they’d be showing the Oculus Rift “HD” (for lack of a better name) in private. I decided to explore the exhibition floor, and found this unlabeled, unnumbered white temp office box. 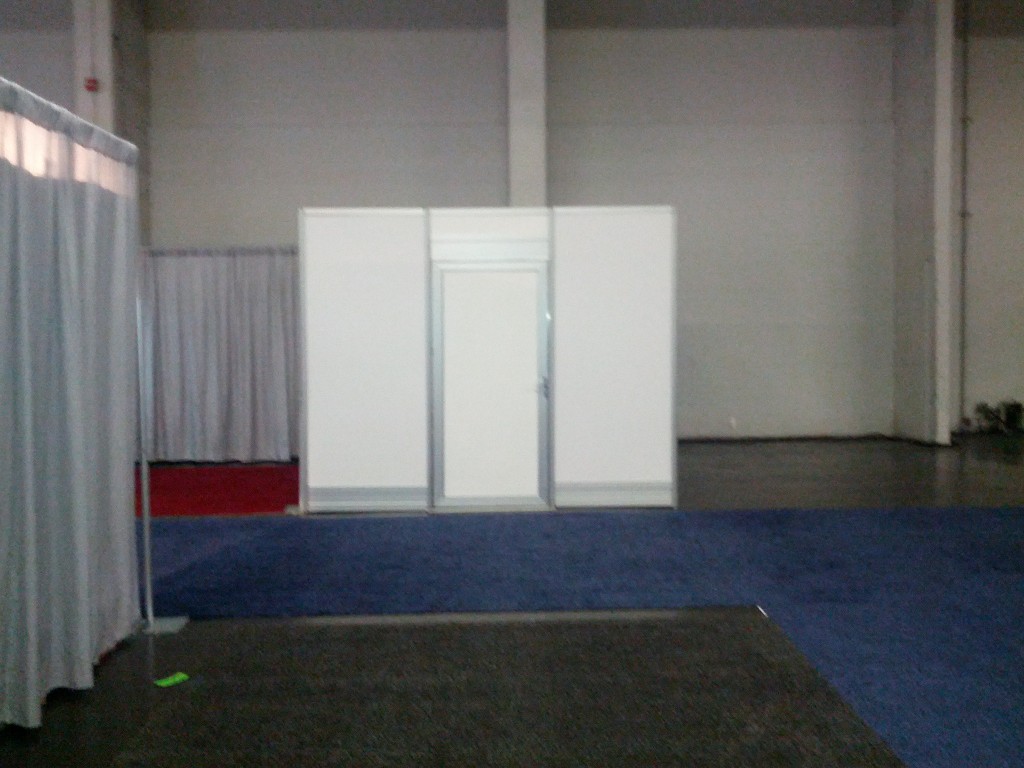 The most exciting booth at the SIGGRAPH exhibitor floor

After a discreet knock on the door (which clearly had seen some knock-related wear and tear during the previous days) and some waiting, I was greeted by a friendly Oculus VR employee, and entered the mysterious cubicle. Another win for brutal assertivity!

No decorations, just a desk, some chairs, a desktop pc and one prototype of the new device. During the friendly pre-demo chat, they asked me about my research and told me that they prefer to show the new device in peace and quiet, to only attract really interested people and give them a decent chance of testing the tech, instead of having a long queue and basicly having everyone pop the headset on and off in a timespan of 30 seconds. That explains the very low profile of the booth.

During a 10-minute-ish demo, I walked around in a medieval castle, flew to the top of a volcano (clipping straight through the mountains, crafty bastard as I am) and was placed in a lighting testing room. I’m pretty sure the environment came from this Unreal 4 tech demo, with some of the bells and whistles toned down compared to the video version, probably since stereoscopic view forces you to render everything twice. Looked mighty impressive though, and using a gamepad I was able to shoot rocket-like balls into the environment, which they encouraged me to track using head movements. I was pretty resistant to motion sickness, although the sensation of walking backwards using the gamepad is quite disorienting when you have a head-mounted display active. It’s all pretty impressive, and it was hard to keep my childish gasps of awe to myself.

The improved resolution / pixel density is immediately noticable when compared to the standard Oculus. Environments – in this case: parallax-mapped stone walls – look a lot crisper (1080p vs 800p makes a real difference when it’s so close to your stupid analog eyeballs). If you really focus on it (and as graphics researchers, we probably all do), the pixels are still clearly visible, but compared to the regular Oculus it’s a day/night improvement. The blur when doing fast head movements is still very noticable, but the effect is weakened by the higher resolution. Also, they were still running this devkit with an older SDK build, so the FoV was quite narrow, something that’s supposedly fixed in the next couple of months. As reported, there’s no translational (forward/backward) tracking (yet), but I don’t think a consumer version of this project would really mark this as a lacking feature in the first iteration. The HD version of the device itself was about the same size as the original rift. It felt like it had the same weight, but it’s hard to compare mentally. (For the most complete overview of challenges with this technology and VR in general, I refer to Valve Software’s Michael Abrash’s excellent GDC 2012 talk)

I thought I’d write up this little review (they actively encourage people to blog about this, there’s no NDA on the demo), and would recommend any SIGGRAPH visitors with an interest in VR to (try and) have a go. Thanks Oculus VR!