I’ve recently finished one of the games released in 2010 that caught a lot of negative reviews: Kane & Lynch 2: Dog Days (metacritic page).

To bring you up to speed: Kayne & Lynch is a franchise by IO Interactive (known for the Hitman series). It features two disillusioned mercenaries, one with a troubled past (Kane), the other heavily medicated and on the edge of a breakdown (Lynch). The games can be described as a Michael Mann film: lots of shooty-shooty bits and a thin plot to tie them all together. 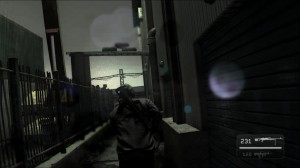 We’ve got to judge a game by its merits, and with that standard set, I cannot see how this game doesn’t tick the boxes. We’ve got bank heists, car chases and exploding stuff. So far, so good. Remember: people buy this game because this is their cup of tea. I don’t go in expecting a Shakespearian story arc touching the deepest dark human emotions. There’s nothing wrong with a bit of pop-corn gaming. Where’s all the slack coming from then?

On the point where the most shit hit the fan: the game features a lot of camera effects, like you’re constantly following the main characters as if they are being filmed by an anonymous third character, employing what seems to be a pretty crappy VCR camera: lights “smear” out over the screen, the camera wobbles all over the place and there are lens flares aplenty. What a lot of reviewers fail to mention is that these effects can easily be switched off. I agree, it’s a gimmick, and for some people, it has failed. I personally liked how they gave the game a very distinct look. When you’re dealing in people-shooting-other-people games, you’ve got to do something. Congratulations, IO interactive, for having the balls to try this.

Another point: the multiplayer part of the game is (half a year after its release) pretty much dead. Too bad, because it was nice to see a developer trying some alternative game modes. Robbing a bank, becoming a traitor, screwing your teammates – the elements were there, but basic gameplay faults prevented it from becoming a hit.