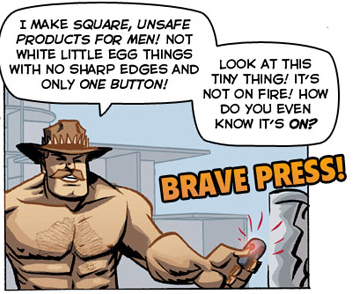 Yes, I know, more comics … Thesis was finished this morning, so more interesting stuff to come!

For now, enjoy this great comic which came with the Team Fortress 2 mac update. I think it’s great how people using (traditionally) different systems can play on the same servers now.

Also, the porting of the Source engine to OpenGL is exciting. The benchmarks still result in sub-par performance compared to native DirectX on Windows, but the fact that a big game developer is making a big move to an open standard is interesting. It’s hard to find specific info on how they do it, but they seem to use some kind of emulation layer which maps DirectX-calls to OpenGL – Okay, this is oversimplified, but the point is that it’s not native OpenGL.

This also means that that Steam is coming to Linux, and with that, even more developers might be interested in releasing games on the 3 main PC platforms (Win/Mac/Linux), and thus using OpenGL as a standard. And yes, a Mac is a PC. It’s a computer. You operate it, it’s on your desk. That’s a personal computer. Case closed.