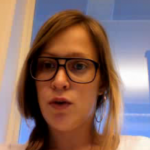 Today, it was time for the defendants to call up some witnesses. Kristoffer Schollin, specialist in IT law who did a thesis on DRM, and Roger Wallis, professor at KTH Computer Science Department. It seems to me these last days of the trial have ventured away from the actual charges, for the court to take time to see this in a wider perspective. I think this is a good thing, but also a very delicate move to make. At the end, a judgement has to fall on these 4 individuals. But it’s good to see the problems and technology explained in court and getting media attention.

More behind the cut. (in the picture: Anna, who blogs live summaries on bambuser. Keep up the good work!)First up was Kristoffer Schollin. The highlights of his hearing, which ventured into the technological viewpoint of Bittorrent:

Next up was Roger Wallis, who was, as Twitter feeds mentioned several times today, not pleased with the way these hearings were conducted. The important points of his hearing – which was more about the influence of Bittorrent and file sharing on the music/movies industry – are as follows (complete hearing here):

Contradicting the opinion of John Kennedy of the IFPI in his testimony yesterday, Wallis said that downloading caused an increase in sales of live event tickets and although there has been a reduction in CD sales, this won’t continue.

After that, Peter Sunde explained to the court how bittorrent files can be obtained by using this movie. Google, instant messaging and even WordPress blogging tools can be used to spread torrent files. Both judge and prosecutors agreed to have this movie shown in court.

After that, the trial went private for so called Personalia. Suspected is that anakata and TiAMO are heard on other findings during the The Pirate Bay raid (small amount of illegal substances found).

We’ll be back with the #spectrial tomorrow.