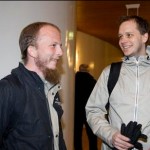 Of all days in the The Pirate Bay trial, this one was the most difficult to cover. Several of the prosecutors got to talk to TiAMO (Fredrik Neij) and Anakata (Gottfrid Svartholm Warg). A lot of questions and responses were out there, the Twitter feeds translated them live at a whirring speed.

I’m trying to cover the trial as best as I can from this blog, combining other blogs, the audio feed and twitter material. It’s nice to see that UK newspaper The Guardian quoted me on their website.

I’ll try to summarize day 4 behind the cut.

oswel questioned about Oded and when the two met. Neij replied by saying he wasn’t totally sure but it was around 2004. Also, he was not involved in the technical aspect of the site, he only wanted to buy ads. Roswel asked how much Oded knew about computers; Neij responded “He’s a normal computer user, he uses Windows.” (Hilarity ensues)

“Not all?” was Wadsted’s reply. Gottfrid explained that it is not up to them to investigate crimes, but that they do inform the police. “We can’t do investigations of our own. And if the police say we should remove a torrent, we will,” he said.

“Neither me or Neij work well in furnished rooms. Peter was better on the verbal issues and media”

Keep following the trial. Organise viewings of Steal This Film. Thoughts on #spectrial. Blog about this. It’s getting more and more interesting every day.