Yesterday, I installed an updated Nvidia driver for my GTX 970 on my Windows gaming box, in order to get the best driver set for playing a couple of new games I  bought. This driver turned out to be faulty, sending my computer into a bootloop.

I’ve seen my fair share of driver issues, so I knew the usual course of action was to boot into safe mode (a mode in which fail-safe display drivers are loaded, and you get all the joy of 640 x 480), uninstall the faulty drivers, and roll back to ones that worked.

This is when I found out that somewhere, someone in the development process of WIndows 10 thought it would be a great idea to shave off some of that boot time by disabling legacy boot mode by default, and thereby disabling the option to get into safe mode. Who needs that kind of shit anyway, right? Let’s go, pass the Kool-aid!

This also demonstrates how the WHQL-certification for drivers is a joke. Apparently this driver set failed on computers using multiple monitors. You’d think a certification authority would check that when they delay driver releases for a few days, but I guess those days are just spent on thumb twiddling.

Anyway, you can keep ramming that F8 key during boot, it won’t register. Instead, you have to sit and watch the Windows kernel fail to boot a couple of times, do a couple of file system checks, until it finally registers that the proverbial shit hit the fan and gives you some options. (Gettng to this screen seemed random to me, but you’ll eventually get there):: 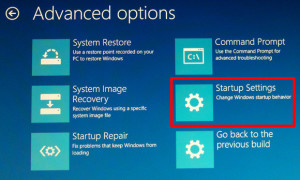 Because in order to get to safe boot, you need to be able to display the login screen. Which is a problem with a turd of a driver. So enjoy booting a few times to get back to that previous screen, then go for good old trusty command prompt* and use this magic on the OS drive:

Yay, now  you can back to spamming F8 at boot, and actually getting into safe mode. Select the one with networking support if you plan on downloading new drivers.