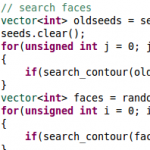 I’ve been implementing an alternative CPU algorithm to draw contours last week. It was pitched by Markosian et. al, and I based my implementation on this Siggraph 2008 class by D. Decarlo.

Instead of testing all faces of a mesh for contours, I only test a configurable amount of random faces. When a contour is found, it is followed as far as possible. The algorithm in its pure form would only deliver good results at large sets of selected faces.

I tested my contour implementation with a couple of settings. I’m using the Triceratops object, which has 22460 faces.

Factor = 0.00001.
So only 1 in ten thousand faces is used to find contours. This number is too low to have good contour coverage over a few frames. Which is normal, since we’re only using 2 random faces out of 22460 to find a contour.

Factor = 0.001.
So only 1 in thousand faces is used to find contours. We’re using 22 out of 22460 faces.
As expected, this number is still a bit too low: it takes 15/16 frames in a stationary viewpoint to draw a reasonable amount of contours. I’m expecting this would work reasonably well for slow moving meshes: 16 frames to reach full contour is not much when running at a decent framerate.

Factor = 0.01.
So only 1 in hundred faces is used to compute contours. We’re using 224 out of 22460 faces.
This is a lot better: after 2 or 3 frames in a stationary viewpoint: all contours are found. I don’t have a movie yet, but the temporal coherence is pretty good too: some contours “flicker” when the seed they use gets destroyed, but reappear again in the next frame.

Factor = 0.1.
So only 1 in 10 faces gets used.
This result is visually equivalent to using all faces, with only minimal overhead. Impressive!