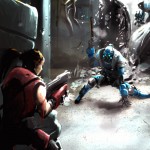 Time for a quick post about a Half-Life 2 mod which kept my attention over the last few years. It was one of the first total conversions released for the Source engine, and they recently released version 1.2 over Steam: Dystopia.

The mod is set in a cyberpunk future, where it’s always corporate greed versus rebel idealism. What makes this mod special is the dual-world gameplay. You’ve got the gritty, dirty real world (nicknamed ‘Meatspace‘) where you fight for control using all kinds of weaponry, and the arcade-y, glowy cyberspace world (nicknamed ‘Cyberspace‘) where you combat opponents and run programs. Both worlds influence eachother. Often a team has to gain control over a security system in cyberspace to open doors in meatspace.

If you’ve got a Source-based game, make sure to check it out. The learning curve is a bit steep, since some maps are non-lineair and fairly large, but it sure pays off to stick around. Kuds to the great global stats-system, too.