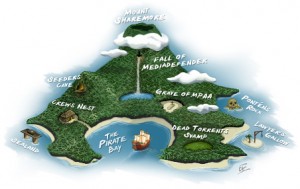 Today, the trial against torrent-site ThePirateBay started in Stockholm, Sweden. It’s very interesting to see how they manage to globalize this trial. A Pirate Bay Bus is standing outside the courthouse with people (video)blogging. Twitter feeds (tag: #spectrial, that’s spectacle and trial) from in and outside the court get translated live. Looks like it was the right time for me to get on twitter ;)

The widespread, user-driven coverage as a purpose:

Rather the trial is a hub around which a whole new network of actors is instigated. Neither is the spectacle a question of old media against digital, social medias. […]

It’s not about the protocols nor the technology. It’s about using these to create new congregations, where anyone is invited and anyone can find their role, build new scenes and make their own performances.

And a great closing statement

Blog and Twitter about this. There’s a lot more at stake than some pirated data.