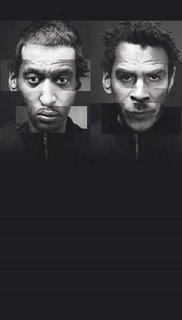 Hoping to see them this wednesday at the Lokerse Feesten (update: I missed them, bummer !), I thought this was the right time to release a remix I’ve been wrestling with during the last months. Danny The Dog (international title: Unleashed) was a mediocre thriller by Luc Besson (Taxi, The Fifth Element, …), but the soundtrack was composed by Massive Attack. For me, the title track really stood out.

I tried to add a subtle dubby feel to it, by overlooping the beats two or three times (it’s random), much like Portishead did in its recent single, Machine Gun. I also played around a lot with the echo/cutoff on the parts without drums.

I overlooped the piano synths by accident, but never corrected my mistake because I thought it sounded quite nice. There’s clipping and misplaced frames all over the place, including the odd vinyl crack here and there.

I’ll probably never finish this, so I’d better get it out the door. Most of the reverb/pitch effects and rough cutting were done using Audacity, with some additional drumkit programming in Hydrogen and strings generation by the ZynAddSubFX Synthesizer. Those are all free, open source applications.