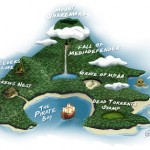 It sure looks like the trial on The Pirate Bay will have to be redone. While the verdict still isn’t final until the appeals have either been accepted or rejected, copyright lobbies are using it as pressure material to shut down smaller trackers and filesharing communities in Sweden and elsewhere.

Most of the international press seems to accept this verdict as final, and that bothers me a bit. They forget that the first round of this high-profile case (which belongs in the High Court anyway) was fought in a local court, bearing the judgemental equivalent of an angry copyright mob with sticks and stones.

Thoughts and quotes behind the cut.

On his blog, Peter Sunde (brokep) writes that he’s appealing for a re-trial and a new police investigation.

Torrentfreak also reports new discoveries on the bias of the judge:

Initially, many Swedish legal system insiders doubted whether the connections to the Swedish groups were enough to warrant a retrial, but the ties to ALAI and AIPPI have changed that perception, according to Swedish radio. Many of the insiders and experts wish to remain anonymous, but Eric Bylander, Associate Professor of Procedural Law at the University of Gothenburg said that “confidence in the judicial system requires that the court of appeal see this as bias.”