I’ve been enjoying playing S.T.A.L.K.E.R. : Call of Pripyat lately, which is the third installment in the series. For people who don’t know the S.T.A.L.K.E.R. games: they are based in the fictituous radioactive ‘zone’ which was created after the 1986 Chernobyl disaster. It is loosely based on the novel Roadside Picnic by Arkady and Boris Strugatsy. You play a ‘stalker’, which is the name the book uses for adventurous people entering the zone to find anomalies, artifacts and unknown technology, which spawned when the disaster happened.

The S.T.A.L.K.E.R. games were made by Ukranian developer GSC Game World, and they have tendency to be a little rough around the edges: lots of crashes, glitches and bugs. Sometimes it seems like the promise of an open world with non-linear story progression and unhampered discovery was a bit too much for a relatively small studio. Luckily, the internet always finds a way: an artist going by the name of Pavel has compiled a mod called “Call of Pripyat Complete“, which bundles a gigantic amount of new artwork, scripts, weather effects and bug fixes. 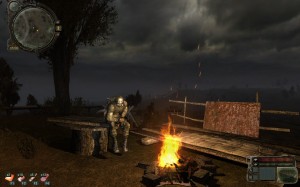 I like how the S.T.A.L.K.E.R. games depend on exploration and atmosphere. The game has a full day-night cycle and random zone “emissions”, which demand you take cover quickly. Hiding in an old rusty boat while thunder and lightning rage on outside, clinging on to your last medkits: it’s pretty scary. Also, this is one of the first open-world games in which the time of day really influences where I’m going. I’m not going to check out the spooky factory building everyone warns me about at 1AM in the night, no sir.

A game which has me on the edge of my seat every time I’m going through a door in an abandoned warehouse delivers a totally different experience when compared to a Call of Duty game, which basically has me gun-toting through a dozen of explosive exotic locations in about 4-5 hours, feeling quite invincible. I’m not slacking off heavily scripted games here, but there’s something about a good open-world nonlinear game that grabs me. If the mission design is good and varied, not all sidequests feel like total grinding.

More stories from the Zone behind the cut.

In one mission, I was contacted by a guy in Yanov station (the central hub for all stalkers) about his brother who was ambushed by some bandits. We decided to enter their camp at night and take the hostage back by force. We agreed to meet at 1 AM, on a little strip outside the bandits’ camp. Sneaking to that spot, hearing the other stalkers approaching and starting the assault – stuff of pulse-pounding tension.

This guy is obviously standing guard at the bandit camp. Pick him off from a distance, with the possibility to alert the other bandits, or sneak closer, in danger of becoming exposed?

Another mission had me on route to Jupiter Station, where a military helicopter crashed, which I had to investigate. All the other Stalkers hated going there, because of all the anomalies and monsters, but informed me there were important documents and tools to be found in the derelict factory buildings.

And indeed, I found a derelict factory, with all metal objects radiating at an unhealty level, and every floor of what used to be office space crawling with danger and anomalies. I even encountered military special ops, looking for the same papers as I did. After a long (literally 15 minutes of popping out from cover, only to dive back in when the bullets of their far superiour weapons started clanking on the metal doors) fight I finally got them all, and got away with the documents. Examining the helicopter itself was not easy either. 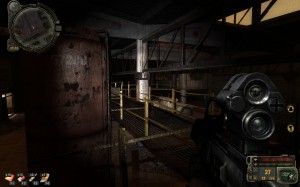 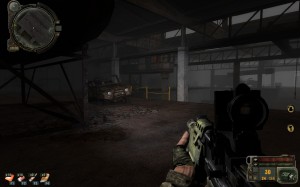 It seemed the helicopter’s electronics were fried by something. I wanted to investigate further, but night was falling, and I sure as hell wouldn’t want to be trapped in the Jupiter factory at night. My armor was in dire need of repairs and my backpack was overloaded with all the loot I found. Trying to get back to Yanov and sell it would take a long time at a slow speed, so I painstakingly had to hide some of the less important loot somewhere in the factory. I made my way out, attacked by rabid dogs. 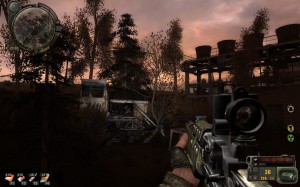 So night fell over the Zone again. See you there soon.

3 Responses to "Call of Pripyat"