Can recommend this game. It’s a fairly linear shooter set in post-nuclear Moscow. It’s developed by 4A Games, an eastern-europe studio which had some developers from the original S.T.A.L.K.E.R: Shadow of Chernobyl games, which really shows. Play it with the original Russian voice acting, because the English voice-overs are atrocious. I like how the game shows that a good scripted gameplay experience still can provide for equal or even more amounts of fun than the most ambitious ‘sandbox’ games. 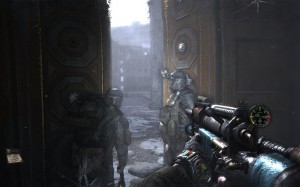 Oh, and I guess it looks pretty nice too. Hefty amount of post-processing to give it that grainy feel (cracks in gas mask, diffraction of light on screen edges), and some pretty impressive lighting effects too. This game has the best ambient occlusion rendering methods I’ve seen in a game to date.